Traveling out West is a journey and a journey that has to be taken in order to see the true wonders of the world. Around every corner, there is a piece of natural beauty that is presented through the Western land. From the dry flat lands to the mounds above the earth, the land depicts a mouth-dropping sight of beauty. Almost as if you were dreaming.

I personally just came back from a ten-day family vacation out in the Western states. From the wonderful memories that were made to the many pictures that were taken, my family and I will never forget the jaw-dropping sights that we adventured.

Our trip began on June 8th, 2022. The beginning of our trip was in the City of Lights, Las Vegas, Nevada. The fun did not start though, till we reached Williamsburg, Arizona (Our first stop to the many miles on foot we trekked through).

My family and I started our day off with an early 6:00 am wake-up call. We packed up our car and headed off to the Grand Canyon National Park. Specifically, the South Rim.

Immediately after stepping out of the car, I was in complete shock at what my eyes were seeing, but it wasn’t until we reached the peak of OOH AAH POINT to fully grasp the beauty of what I was viewing. When reaching the point, you could see miles of untouched land, that held the deep canyons and wildlife.

After completing the hefty trek, we adventured off to Horseshoe Bend. The most talked-about scenery in the area. I have seen pictures before but heard that it is a much more beautiful sight to see in person, and boy was they right. The iconic mound of rock that sits centered in the Colorado river helps give the exact resemblance to a horseshoe. The 1-mile hike was completely worth it. Once stepping off the path into the overlook, you are undoubtedly in awe of what nature gives us.

After visiting two of the most viewed spots in the area, we heard about Glen Canyon Dam. The tourist destination that was not as popular as the Hoover Dam, but still gives off stunning views. Once we arrived, the views were gorgeous and I understood what the surrounding people were talking about.

We didn’t trek many miles in Monument Valley, but we did take an amazing 2hr scenic open truck tour. If you are ever in the area it is a must-have. During our tour, we learned the Native history, visited an iconic John Wayne movie site, jaw-dropping sightseeing, and a plethora of small pit stops that revealed the Native culture.

One of my favorite days was day 3. Day 3 was beyond words. The historic Canyon Lands revealed a plethora amount of rich history that told the stories of how the Natives Lived in the harsh winters and blazing hot summers. Not to mention the views. The views that could be seen through the Canyon Lands were unlike no other. It was also a bit of an adventure. From climbing homemade wooden ladders to climbing the rock walls, there was never a dull moment.

After seeking through the Canyon Lands and not getting lost, we made our way to the real fun, Arches National Park. 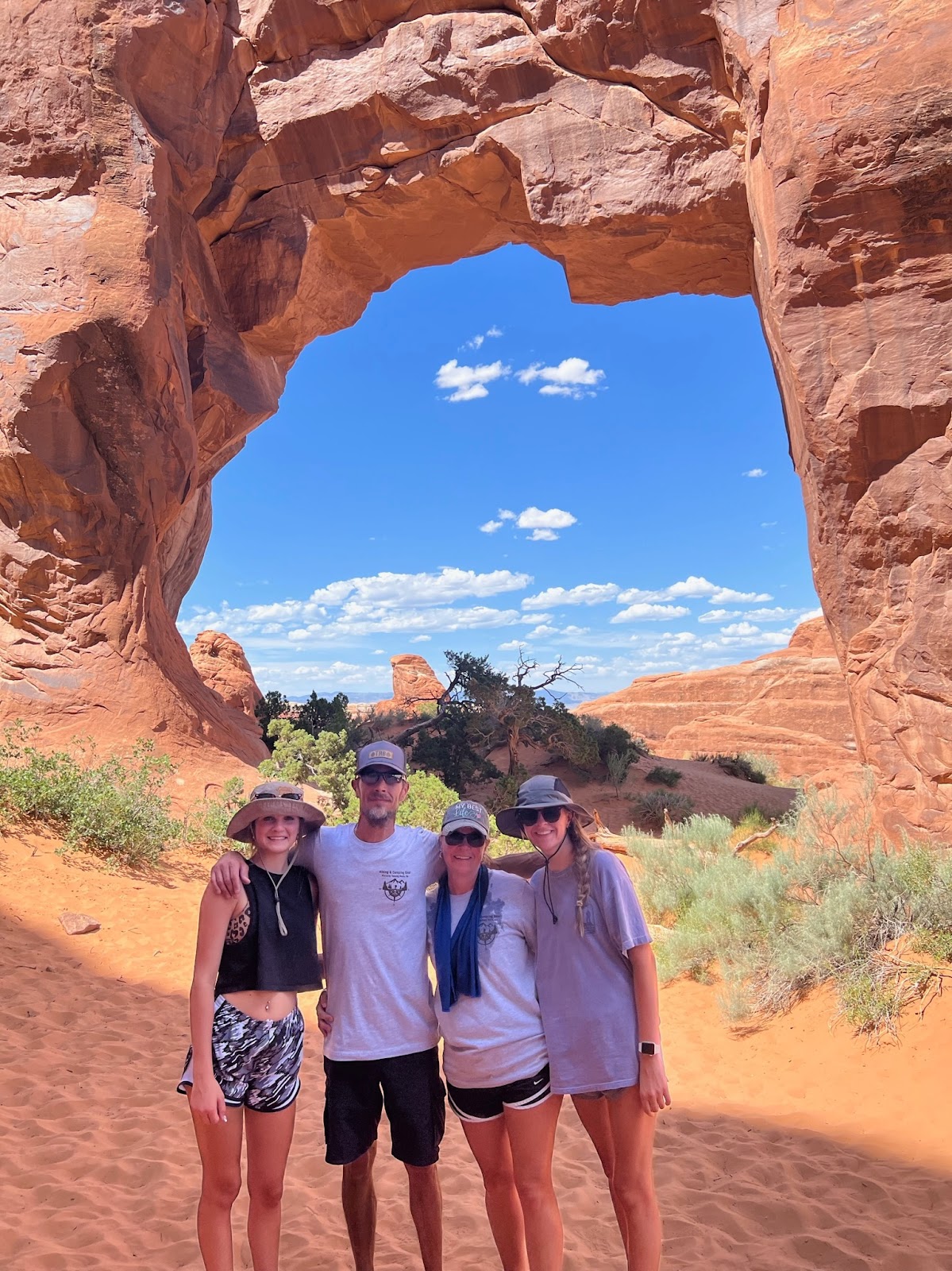 The park itself consists of many and I mean many small hikes that lead to dreamy lookouts. The views that could be seen through the Arches were unreal and the natural beauty that thrived through them was unlike anything that I have seen before.

Bryce Canyon was our second to last major pit stop of our countless miles of trekking through the stunning lands of the amazing countryside. Once entering the park, we had countless hiking trails to choose from. We ultimately chose the Sunrise to Sunset points, which led down to another trail named The Great Rock Wall. While walking down the trails, I could not help but keep my eyes wandering around. There was a beautiful sight to be seen around every corner, it was unreal. It was like I was in a dream. While walking down our first trail, we ran into a small cute family of Prairie Dogs.

Once we reached the ending of trail one, Sunrise to Sunset, we ended up reaching trail two. The Great Rock Wall, and boy oh boy was it a steep walk down, but it was definitely worth the walk down. At the trailhead point, we ended up walking through a slot cave that revealed a single Pine Tree that went higher than the canyons. I was amazed by the vast green vegetation that grew within the park.

Our final destination to check off our itinerary was the great and mighty Zion National Park. The most visited national park in the United States. While there, my family and I chose to hike the most talked about trail in Zion. Which was the Narrows. The Narrows consists of a 1-mile hike to the river head, which then leads through the canyons. Once stepping into the refreshing 55 degrees water, you are hit with a rush of chill bumps that covers your body.

While we were walking through the water, some spots hit up to your ankles to your stomach. It was unlike anything that I have hiked through before. While trekking through the water, you could see trees and flowers growing from the sides of the canyons. Not to mention the many caves that we passed by. They were picture-taking moments. It was a thrill, to say the least.

While in Zion, we also chose to do one of the smaller hikes, The Garden Pools. The Garden pools hike consisted of three main pools. Upper, middle and lower. Each pool was surrounded by its natural details. The middle pool to be specific was my favorite, due to a trickling waterfall that fell to the lower pool.

We ended our thrilling, adventurous, and forever memorable family vacation in the crazy Las Vegas, Nevada. While Las Vegas was a fun and exciting time, I would have to say visiting Arches and Zion National Park was at the top of my list when it came to my favorite spots.

Through the jaw-dropping and dreamy views, I would undoubtedly drop everything that I was doing to adventure out back to the Wild Wild West.

Welcome to our Blog. We are diligently working to get Lateral Drift open before Summer 2022. Please check back to find out about our Grand Opening date!